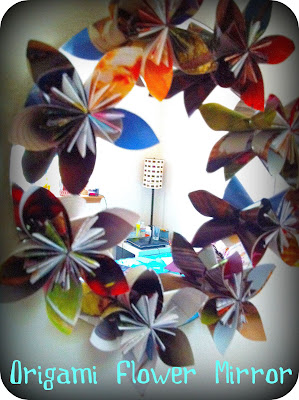 One of the websites I browse frequently - as in, more than once a day - is Craftgawker.  The whole premise of the website is inspiration for crafters.  I check it out to get ideas and try some of the tutorials that are posted.  Or just to put myself in a better mood.  :)

Anyway, I ran across a tutorial at Nifty Thrifty Things for an origami flower while browsing Craftgawker one day and decided to make some out of some of the millions of magazines I have floating around my room.  This is what I ended up with: 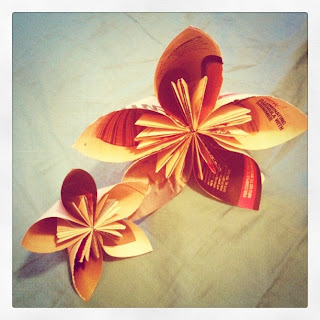 I got so excited about them that I decided to make a bunch of them one night while I watched Hotel Rwanda with one of my roommates - amazing movie, btw.  As I was making them, I discovered that I could cut off the back pointy end so that it would sit flat without messing it up.  Genius, I know.
I originally planned to arrange mine around a round picture frame but couldn't find one.  So I opted for the mirror instead.
So here's how you make the mirror (one day I'll remember to actually take pictures as I'm making this stuff):
And you're done!  Pretty easy and definitely cheap!  I especially love that it has a certain tropic feel to it that rings in the summer.  Happy crafting!

I love these flowers and the fact that you recycled magazines... they really look nice! Putting them on the mirror with the reflection adds extra depth! I know you have this linked up at J&Ms Strut Your Stuff link party too.
Hugs, Antonella :-)

Hi Dear,thanks for dropping by,well i visit you & your smart blog is so coool..love your ideas & creations..keep it up :)
Lots of Love

Confessions of a Stay at Home Mommy said...

This is beautiful! I would love it if you would link up to my Tuesday Confessional link party going on now: http://www.craftyconfessions.com/2011/06/tuesday-confessional-link-party.html. I hope to see you soon!
~Macy

Very pretty. :) Following from Not Just a Housewife. Would love to have you link this up to my {wow me} wednesday link party going on right now over on my blog. The most viewed link will receive a set of fancy rectangle chalkboard labels from my etsy shop. Hope to see you there.

What a pretty idea! I am a paper crafter, but I've never made origami- I'd love to try this.
Pinning and tweeting your post right now:) Thanks!
C:)

how pretty! I really enjoy this idea. Thanks for sharing! http://caribbeanmissionarywife.blogspot.com/

Hi Kendall - so so pretty! I love origami but haven't progressed beyond a butterfly. I should try more subjects - your flowers are so pretty!

SO cute! That is such a great idea!

What a cute idea! Those flowers could be used for so many things - thanks for sharing!

Featuring YOU today in my {take a look at you} post. Thank you so much for sharing this at my party last week. :)

I'm just a simple girl trying to express my creativity for my Creator.